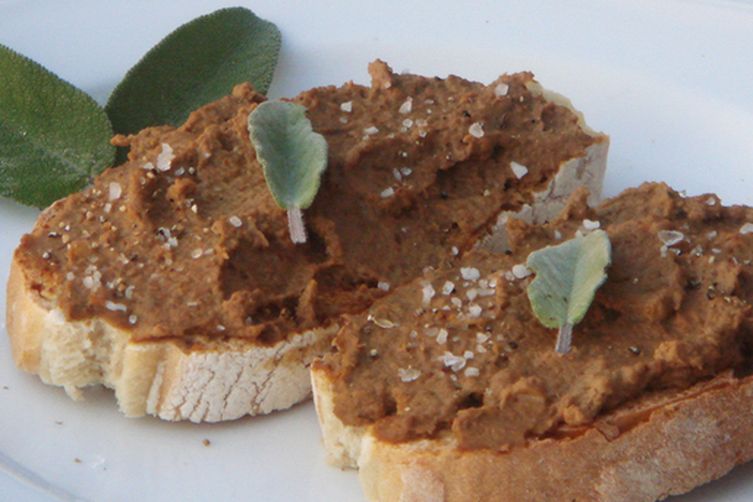 Author Notes: This is a long story… I live in the middle of Tuscany, near a village with 350 people, all old farmers. I have had the privilege to eat in their humble houses, and be it a plate of beans with bread or a roasted rabbit on Sunday, everything tastes delicious. On the 15th of August, everyone gets together and have mass and the priest blesses the crops to come (wine and olive oil) and we cook for the whole village. And when I say we cook, I mean we, the women of the village. So we make lunch for more or less 350 people. All the produce and work is paid by us and expenses divided. Last year I was allocated the crostini section, which consisted of making 6 different types of crostini, one of which was the famous liver one. The sauces were made at home by 6 different ladies and all I had to do was assemble the plates. After one hour, I had obviously tried all of them and the liver one was quite good. So I asked for the recipe. 20 women shouted at the same time “Ma non, la mia è meglio!” meaning, “No, my recipe is better!”. It ended up in a huge argument about the ingredients and so on. At some point, and very discretely, one of the ladies poked me and said “Come to my house and I will show you how to make a decent liver pâté, all they know how to do is poor people’s liver pâté!”

In reality hers was much better. But the best one I have had the recipe was given to me by David, a Chef who owns a 16 seats restaurant and makes the most brilliant food you can imagine. He only used heart, liver and capers, opposed to the one they do in the countryside with a lot of spleen and anchovies that gives it a very dark and sour texture. So I am just passing on David’s liver pâté for crostini or other uses.

Food52 Review: Maria Teresa Jorge’s simple and elegant recipe literally takes minutes to prepare. I used just chicken livers, leaving out the hearts (personal preference). The livers are sauteed with onions, capers, wine and sage and it is so flavorful. I chose to make this recipe as it is done in the Tuscan countryside, to chop rather than blend the livers. And I made it a day in advance of serving, and I think that it was even better the next day as the flavors had a chance to meld. My friends raved about it thinking it must have been very difficult to make. I really love a recipe that uses only a few ingredients, is not fussy, and has such a delicious result. Whether you serve at a party or make a light no-fuss dinner for one this recipe is simplicity at its best —sdebrango