THE VEGETARIAN VERSION OF ‘THE AUTHENTIC’ PASTA BOLOGNESE! 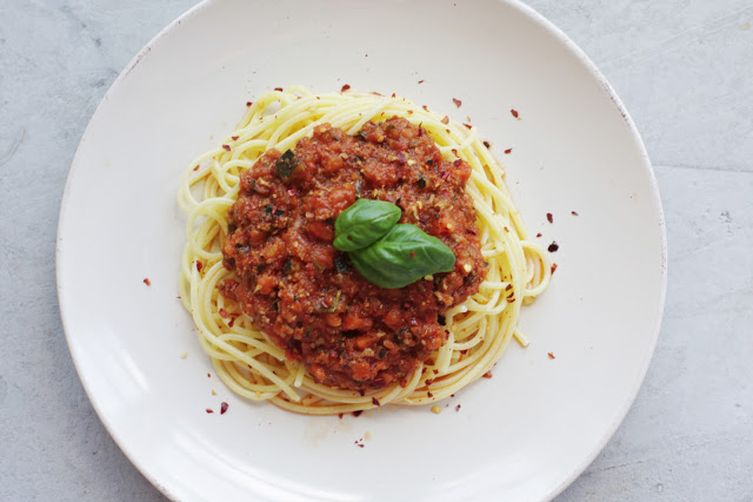 Author Notes: Not wanting to eat meat doesn’t necessarily makes me want to eat fake meat instead. However, I do not live alone, and I’m the only ‘real’ vegetarian in this household.

To be honest, I’m not really a sucker for meat-replacement products. Not wanting to eat meat doesn’t necessarily makes me want to eat fake meat instead. I’m not into the specific taste and structure of meat, and anything made that looks and tastes just like it, isn’t really on my list of interests.

However, I do not live alone, and i’m the only ‘real’ vegetarian in this household. (And the only one that cooks.) Though, Wolf doesn’t get any meat (yet), but he’s not even two years old, so his opinion doesn’t count. He just is a vegetarian, and loves his quinoa-veggies-lentils-egg-or-whatever-dinners deeply.

All the others dó like some meat sometimes, and I don’t want to prohibit them from eating it, as long as it is of good quality and just not too often. I hope one day the choise of being a vegetarian will be one of themselves. (Of course I use some discreet propaganda here and there 🙂 )

This Pasta Bolognese is one of my favorite recipes, because it’s always satisfying and very much appreciated by everybody eating it. And the funny things is, the kids really believe they’re eating meat. Even Nicolaas didn’t taste the difference at first (yes, I told him later on). It’s because my kids assured me a Pasta Bolognese without meat is no Bolognese. So I found a meat replacement product from an organic brand named ‘Provamel’, which doesn’t really look apealing at first sight, but works very well in a dish like this. It’s made of soy and looks just like the real stuf. (There are so many brands out there, and it’s all quite the same i guess.)

Of course I do get questions like ‘but mom, why do you eat meat, while you’re a vegetarian?’ But for some reason, they never seem very much interested in the answer, which I just mumble away. They’re happy to eat a real Pasta Bolognese. And that’s it. —Mirjam Leslie-Pringle