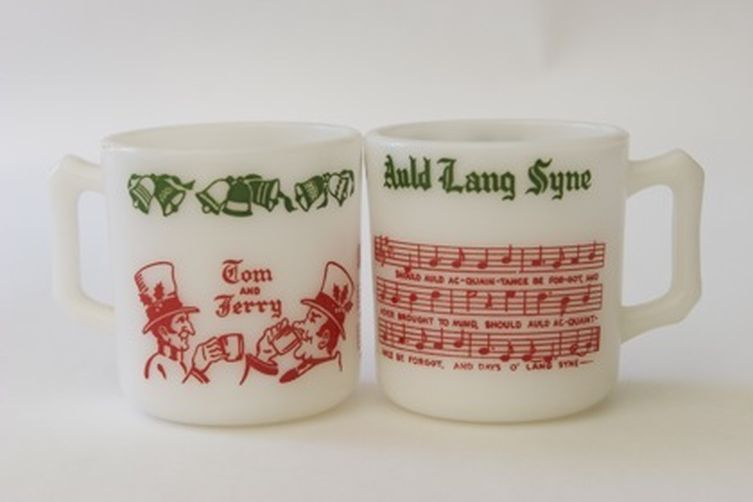 Author Notes: For the first three-plus decades of my life I spent Christmas day at my grandparents. One of the things I most looked forward to was my grandfather and his brother, Bill, retreating to the kitchen to make Tom & Jerry’s. They’d separate the eggs and each take a bowl and whip it using a hand-beater. One of them would heat the water and the other would measure out the booze of the drinker’s choice: bourbon, brandy or run. Then they’d served them in decorative Tom & Jerry cups that were stored in the far reach of the kitchen cabinet for the rest of the year. It never occurred to me as teenager, when I first began to drink one every year, or later when I was an adult to ask the origins of this drink that I loved so dearly. As it turns out, Tom & Jerry’s are a common Christmas tradition in the mid-west and are renowned for warming you up. Given that my grandfather grew up in North Dakota this made perfect sense. Although most recipes call for milk, my grandfather made his with hot water—no doubt this had something to do with the 13 children in his family, making ends hard to meet so milk was most likely a luxury that couldn’t be afforded. As an adult I began to collect Tom & Jerry sets. I was surprised there was a bowl included, which my grandparents didn’t have. It must have broken at one point and was never replaced. I’m not sure who has that set now, but I’ve amassed a few of my own and can’t wait to pull them out this year. – lorinarlock —Lori Lyn Narlock

Food52 Review: Though we had heard of them, no one in my family had tried a Tom & Jerry before, so we were all very excited the evening I whipped them up to share. We were definitely not disappointed! This is a wonderful way to warm up (from the inside out!), on a cold winter night. The sweet, heady brandy (our spirit of choice), was cozily blanketed by the creamy egg topping, and the fragrant nutmeg was the perfect flavor to pull it all together. I can see how this drink would normally beg to be made with milk, but the silkiness of the beaten eggs really made it unnecessary (though if you used milk, I’m sure it would be lovely). I’m also imagining how nice these toddies would be with just the tiniest nip of maple syrup… Either way, delicious! —fiveandspice