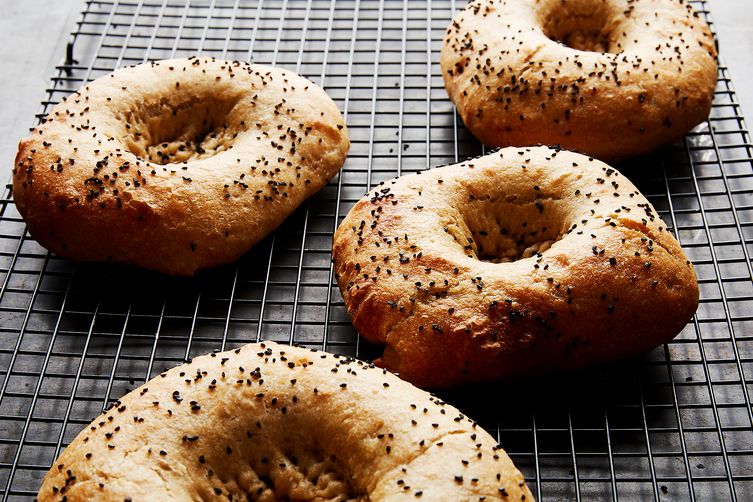 Author Notes: I spent 5 weeks in Uzbekistan for research and in that time became obsessed with the light, airy breads that are baked in every corner of every street in the city. Tashkent non is the typical bread sold everywhere in Tashkent, Uzbekistan. Everywhere you go you can see bread sellers wheeling these around in old-fashioned, big-wheeled baby strollers straight from the tandyr ovens that are tucked away in the crevices between buildings in the old city.

A word about non – Tashkent non is light and fluffy and addictively delicious. It’s got a chewy, glossy crust and an open, airy crumb and when it’s piping hot, there’s nothing more delicious. It is served with every meal, the toroidal loaves broken up into chunks and placed around the table. An individual can effortlessly put away 2-4 loaves (or I can…), either plain, dipped in honey and butter, or helping to transport shashlyk/plov into your mouth.

The other main kind of non is Samarkand non, which is a whole different story: it is dense, dry, and lasts a long time. Might be good for a stew, but not good for just snacking. Samarkand non, which looks like a giant bagel, is what most people tend to make at home and the predominant kind of bread found (of course) in Samarkand markets. The main difference in the recipe is that they use milk in place of water, which for some reason makes it more dense.

These breads do usually require a single specialized piece of equipment called a Chekich, which is a wooden handle with a pattern of metal spikes on one end. The chekich is used to stamp the center of the bread and keep it from rising. Since most people probably don’t have one, you can replace it with a fork. This recipe makes about enough for dinner with up to 4 people. The bread is very fast to make and multiplies easily if you’re serving more people and is pretty forgiving of mistakes. It’s derived from a mixture of a recipe given to me in Uzbekistan, “Silk Road Non” from Jeffrey Alford and Naomi Duguid’s Homebaking, and that of The Art of Uzbek Cooking blog (http://uzbekcooking.blogspot.com/). – solmstea —solmstea

Food52 Review: Don’t let the ease with which this bread can be put together fool you into believing it has no taste. That is one of the reasons I like non breads. They are always delicious but you do want to eat it the same day, and preferably hot out of the oven. I am not a big nigella seed person so I switched to poppy seeds, but I could see cumin, black pepper or sesame seeds as well. I used the lard to brush the dough because I love the flavor of lard and bread. Solmstea’s recipe is right on all the way around. Clear, concise and yummy. Definitely get out the honey and good butter for this one. – thirschfeld —The Editors