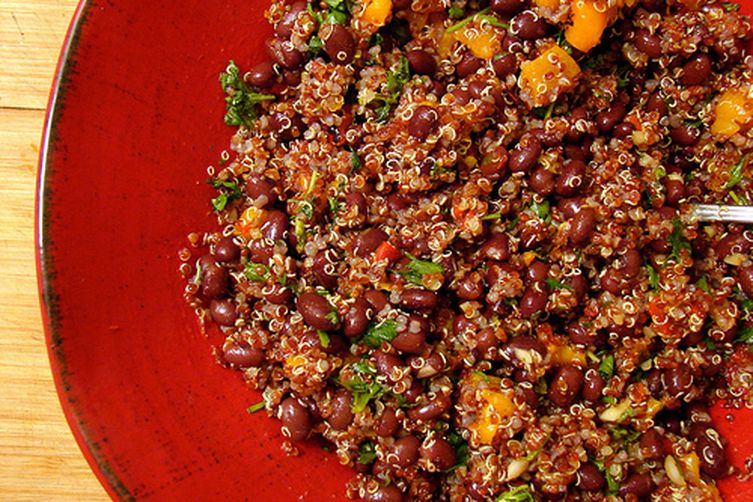 Author Notes: I was diagnosed with fibromyalgia almost 10 years ago, and it’s one of the biggest reasons I cook and eat the way I do today. By 2001, I was the least healthy I had ever been, and I realized that I needed to make some major changes if I wanted to manage this condition, starting with what I ate. I have never had much of a sweet tooth, but I ate a lot of processed foods, so I decided to cut those out and incorporate more whole, minimally processed foods into my diet. I also began reading about the so-called “superfoods,” and the beneficial properties of certain vegetables and legumes, grains, spices, and seasonings. This salad was my first attempt at revamping the classic black bean salad to boost its nutritional punch, and it’s still a favorite. It’s packed with flavor, and it’s rich in protein, fiber, antioxidants, and omega-3 fatty acids. It also travels well, making it a great dish for a picnic or bag lunch. I generally cook dried beans in bulk and freeze them in portions, but this works just fine with drained and rinsed canned black beans. Some people detect a bitter flavor in quinoa, which can be eliminated by rinsing it in a few changes of water before cooking; I’ve never had an issue so I didn’t include that step. The cilantro-averse among you can feel free to substitute fresh flat leaf parsley instead. – lastnightsdinner —lastnightsdinner

Food52 Review: This is a fabulous recipe, full of flavor and so healthy! The salad is easy to make and quick to put together. It is delicious! I love the addition of lime and chile — it has a good heat but it’s not too hot. I could not get chipotle powder so used chipotle Tabasco instead, which worked well and still didn’t make it too hot (for me). It is a great salad as a meal in itself or as a healthy side. I will be making this this again! – Jaynerly —Jaynerly