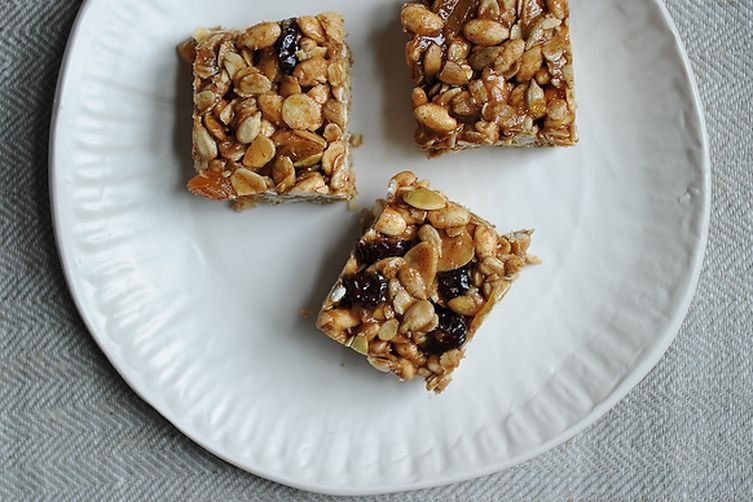 Author Notes: My friend Sara is a great cook, and she’s forever amazing me with her deftness at making something transcendent out of a few simple ingredients. She doesn’t tend to favor elaborate, cloying desserts — more than once she’s ended a dinner party with a plate of her homemade “granola bars.” They’re chewy and rich, a jumble of nuts, cereal, seeds and dried fruit barely held together with almond butter and honey (no baking involved). She’s not shy with the salt, which I think really sets these bars apart. Last week, she shared the recipe with me, and now I’m sharing it with you. These are great to have around, as a dessert or a snack. —Merrill Stubbs

You just want them lightly browned.

Almond butter makes these bars rich and chewy — just make sure to stir it up well before you use it.

Mixing the honey and the almond butter, which will be the "glue" that holds everything else together.

You want to warm the honey and almond butter just until it loosens up a little — make sure not to let it get too hot, or it will harden up.

In go a big spoonful of both cinnamon and salt.

It helps to mix together all the dry ingredients before you add the "glue."

Folding everything together — careful not crush the puffed rice!

The mixture is sticky, so make sure to line your pan with parchment paper.

I pressed everything into the pan with my hands so that it wouldn't fall apart once it was cut.

After a few hours in the fridge, it firms up, and you can cut it into squares.