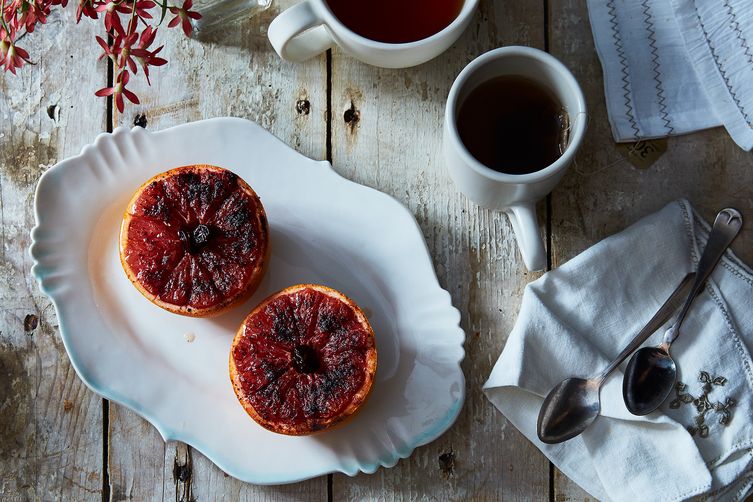 Author Notes: We spent many a holiday with the in-laws. After “us kids” started having children, my mother-in-law elected to go by “Nonnie.” Before she became a grandmother, and after, she always served the most elegant holiday breakfasts to us all. But what stands out the most in my mind is how she would prepare a broiled grapefruit half for each person upon rising. We were all allowed to get up whenever we wanted on Christmas morning. As we wandered downstairs, our individual grapefruit would be waiting. She deftly cut the sections of the grapefruit perfectly with a grapefruit knife, drizzled maple syrup on top, sprinkled with cinnamon, and then browned them under the broiler. Of course she served these with her endless supply of grapefruit spoons to everyone who wanted one. The care that she took with each one always made us feel so special. And best of all, you got to talk with Nonnie, in the kitchen, usually just one on one, as you savored your warm grapefruit. She exuded a delightfully sunny kind of rise and shine outlook that was rather contagious. It was a wonderful way to start the morning. Once everyone was up, we then all sat around a huge table for a sumptuous feast; sometimes we were a table of 14, but it was talking with Nonnie over that perfect grapefruit half that I remember most fondly. I am adding my sumac to the recipe. I think Nonnie would have liked it this way, too. This recipe is dedicated to her. —Sagegreen

Food52 Review: This recipe is delightful and my new go-to afternoon snack—easy, interesting, and healthy. And a slightly warm grapefruit is more satisfying and comforting than a chilled one on a winter day. Don’t skimp on the sumac—it’s delicious. Or try it and and then play with your own spice combination. Just remember to line your pan with parchment paper or foil; the sugar/juices left a broiled-on mess. – Allie —The Editors

1 of 5
Photo by James Ransom