by wiki
in Vegetarian
0 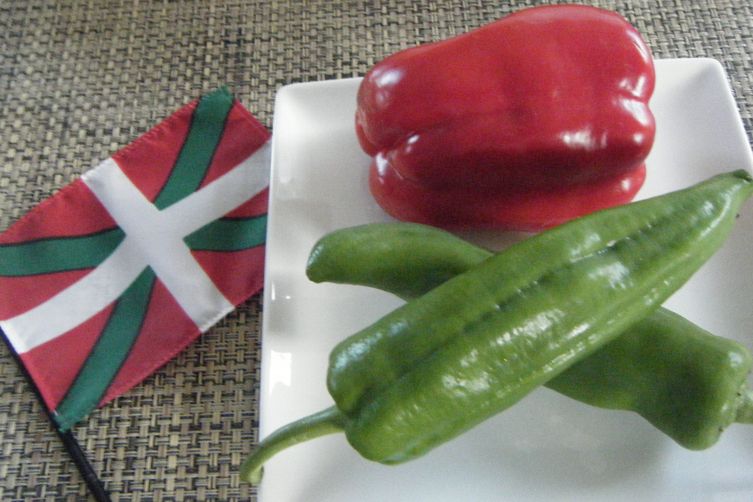 Author Notes: …for Basque land and freedom. Piperade is a classic Spanish/Basque dish. The Basques seem to have dropped in from outer space, as their language is unrelated to any of the romance or Germanic languages spoken in Europe. But then, hey, there they are overlapping the frontier between Spain and France like the Area 51 of the Pyrenees . Pintxo is the Gallician term for tapa. So this is a small plate which you can follow up with more pintxos as you drift from tavern to tavern at 3:00 a.m. The recipe here is portioned for two generous pinxtos but you can multiply as needed. Don’t skip the eggs.

DirectionsAuthor Notes: …for Basque land and freedom. Piperade is a classic Spanish/Basque dish. The Basques seem to have dropped in from outer space, as their language is unrelated to any of the romance or Germanic languages spoken in Europe.

The ideal cooking and presentation vehicles for this would be earthenware cazuelas but you can use a deep, flat pan that you can cover.
Over a gas burner or on an outside grill roast the peppers until blackened. Place them in a paper bag and fold up the top to seal. Allow them to yield some steam for about fifteen or twenty minutes and then rub off the blackenend skin Stem, seed and thinly julienne the peppers
Chop the tomato and crush the garlic
In your pan or cazuela slowly heat up the oil short of the smoke point
Add the garlic to the pan and allow it to color, follow that with the onions and then the peppers and tomato
Season with pimenton, salt and pepper, reduce heat simmer slowly, covered for about 30 minutes.
About half way into the finishing stage for the piperade bring a pot of water to a boil, and add the vinegar.
Uncover the piperade and torque up the heat to sizzling
Break and poach the eggs. I like a three minute egg that’s still runny. Portion your piperade and top with an egg and allow your guest to let that gooey goodness run all over it.
*Note to cook: when available, usually in August, by all means substitute Hatch chilis for the Anaheims if you can find them. The Hatch peppers can vary widely in heat level and there really is no way to know from color or anything.
This recipe was entered in the contest for Your Best Spicy Recipe