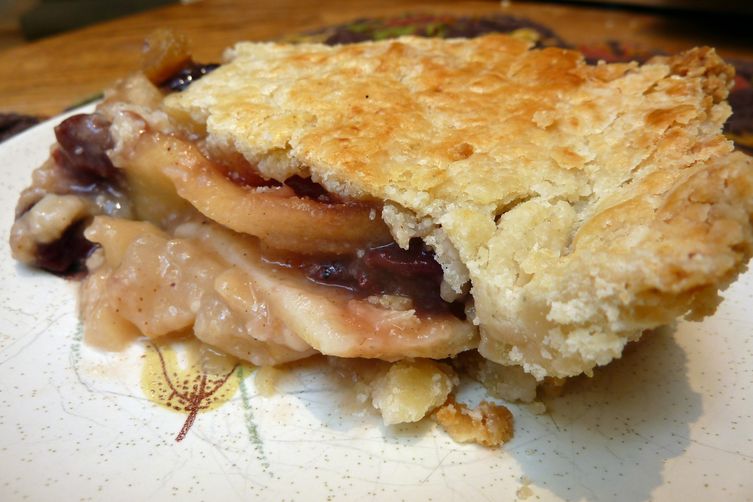 Author Notes: One of my favorite desserts is a glass of great port that has a nectar-like sweetness to it, pears drizzled with honey and a wedge of blue cheese. Heaven on a plate. So I decided to turn this into a pie, adding some friends like dried fruit macerated in port, a little sage leaf to a pear juice reduction, and some butter. After all, what’s a little butter between friends? For the blue cheese crust, I highly recommend a less soft bluey cheese. I used Point Reyes Blue Cheese which has a lesser amount of blue mold in it versus something like a gorgonzola. The soft gooey blue cheese won’t work so well here. I didn’t want the blue cheese flavor to overwhelm the other flavors, so I didn’t put a lot in the crust; but if you want to add more, go for it, but make sure you take the same amount you’re adding away from the butter so that the flour to fat ratio doesn’t change much. And honestly, this pie is a little trouble to make since part of what makes it work so well is the amazing crust, but trust me, it’s worth it. – ChezSuzanne —TheWimpyVegetarian

Food52 Review: This lovely pie makes you want to curl up in front of the fire with a good book in one hand and a glass of port in the other. If the thought of blue cheese in the crust scares you off, don’t let it. It is virtually undetectable, however adds a lovely touch of saltiness and flakiness to the final product. – Victoria —The Editors