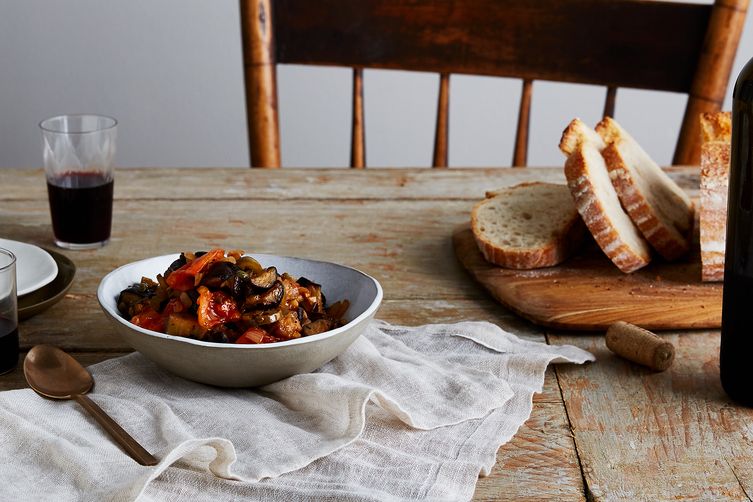 Author Notes: My paternal nonna (grandmother) was the quintessential Italian cook. She was short, a bit on the round side, and everything she cooked in her kitchen was Italian—even after living in a Latin American country for over 30 years. I always thought she missed Italy so much, that the only way she could stay connected to the mother country was by refusing to change her cooking style and adapting new ways. She stayed true to her Italian roots.

And that is how I learned to cook Italian food. The old way. She was known for tons of signature dishes, each ranked by how many and often people in the family would request them.

This eggplant dip was one of my favorites. Even at a young age and with all the grown-up ingredients, I loved this dip. It’s perfect to eat with toasted French bread, atop a steak, or mixed into scramble eggs. The applications are endless. It’s not a complicated recipe. As always in Italian regional cooking, simplicity rules the day. Plus it keeps well in the refrigerator, which gives me an excuse to make a big batch and eat it for days. – Sweetbites —Sweetbites

Food52 Review: I like that this is a relatively fast dish to make (after the eggplant drains). It’s a great topping for bruschetta (on a spread of fresh ricotta!), and i enjoyed it mixed into pasta (again with the ricotta!). In both cases, the addition of some pinenuts (for texture) and golden raisins (a little more sweet to the sour) were nice, along with a little shower of parmesan — though it’s perfectly fine without the additions. I didn’t try it on top of steak as the recipe notes suggest, but it sounds like a great idea! It’s the kind of dish I like to make a big batch of to have on hand for putting together a quick meal. It’s easy, tasty, and versatile. – vvvanessa —The Editors