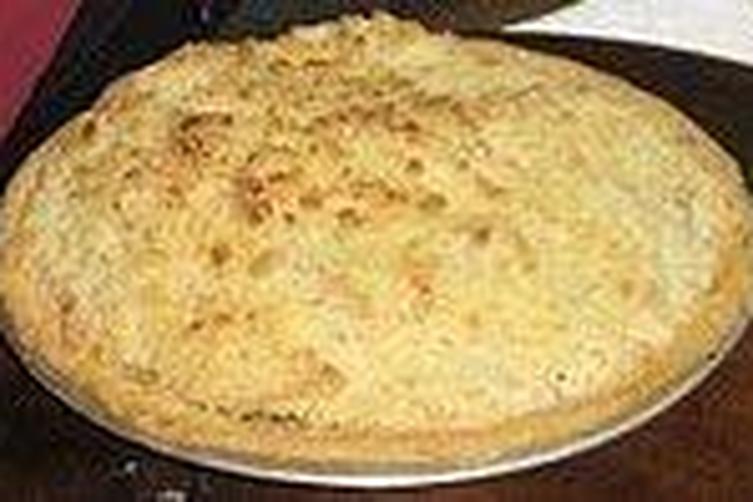 Author Notes: My Grandma Hogan lived for desserts. She was NOT an outstanding cook, but her sweet tooth rendered her incapable of becoming a poor baker.

As a child, I remember savoring a slice of apple pie that tasted magical. Every other apple pie I’d tasted was made with a double pastry crust, and the syrupy filling never masked the mushiness of the apples. Knowing the typical textures I’d encountered before, I recall wondering if my Grandma Hogan’s version even contained apples. (It did!) Grandma only baked that pie every so often. I don’t remember her serving it at holiday meals; she would make it if one of her children requested it, or occasionally when she “just felt like pie.”

I didn’t just enjoy Grandma’s pie for its unique crust and its irresistible contents. To me, it embodied Grandma’s attitude that not all aspects of life should be serious: sometimes, we should just eat, laugh, and enjoy. When we sang “When Irish Eyes Are Smiling” at my Grandma Hogan’s 80th birthday party, I couldn’t help but think of the sparkle I’d always seen in her gaze when she served or encountered dessert.

I asked Grandma Hogan for her apple pie recipe when I was a sophomore in out-of-state college craving a taste of home, and she gave me her recipe. One of my sisters asked her for the recipe a couple of years later, and Grandma gave it to her. About four years after that, my sister and I discovered that our recipes featured slightly different quantities and different types of apples. Nevertheless, both versions had received rave reviews each time we had baked them.

I have to admit that, over the years, I have added a few of my own tweaks to the version of the recipe I received. Even so, I think of Grandma Hogan every time I bake it. Sometimes the baking process ends in tears, but the pie experience always yields smiles and laughter. Grandma Hogan fought a long battle with Altzheimer’s that was largely terrifying for her, but she managed to retain the childlike sense of lighthearted mischief that made her who she was until the end. I have to say, my sister and I believe that the differences in recipes were a result of the latter. Whatever the truth might be, Grandma herself sampled slices of what was once her own creation several times before her death last November. Each time, she commented that whoever had baked that pie sure knew what they were doing.

I want to be remembered for this recipe because it’s proof to me of the reality of love: that love lasts, wrapped tightly in positive memories, even after you don’t even remember who you are. I want to see that sparkle that shone in Grandma Hogan’s eyes in future generations. —shamrock455