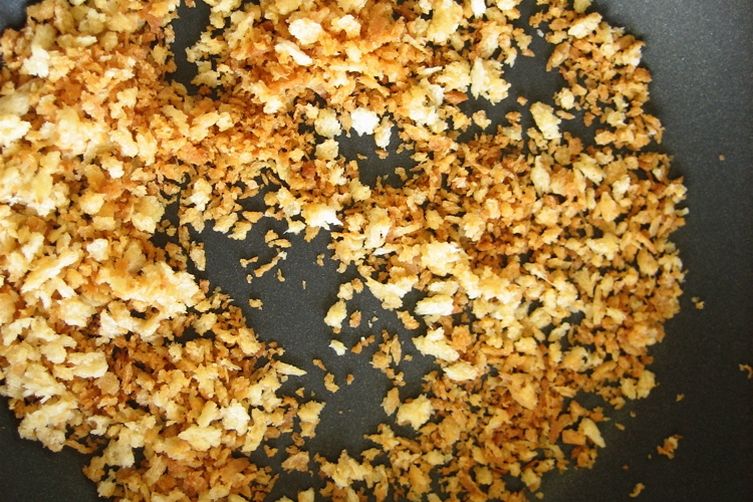 Author Notes: As much as I love a perfectly ripe tomato, baking does something magical to them. After having many a delicious tomato tart, I thought, why not a tomato tart tatin? I keep the ingredient inside the tart simple to let the tomatoes sing. But, then to provide a contrasting texture and burst of flavor, I like to top the tart with a mixture of breadcrumbs and herbs. It’s like the savory equivalent of an oat crumble topping! —fiveandspice

Preheat the oven to 425 F.
Melt the butter in a skillet over low heat, and cook the leeks until the are caramelized, about 15 minutes. Sprinkle with a little salt. Set aside.
In a 9 or 10 inch oven-proof skillet heat the Balsamic vinegar, 1/2 Tbs. olive oil, and sugar over medium until the liquid starts to bubble. Add the tomatoes and cook for about 5 minutes, gently stirring to coat the tomatoes. Remove from the heat. Sprinkle with salt and pepper.
Carefully spread the caramelized leeks over the tomatoes.
Cut the rolled out puff pastry dough into a circle slightly larger than the pan with the tomatoes (about a 10 inch circle). Spread the mustard on the dough, then carefully lay the pastry, mustard side down, on top of the tomatoes and leeks, tucking the edges down along the sides of the pan.
Make several 1 inch slits in the pastry to allow steam to escape, then place the pan in the oven and bake until the pastry is golden and puffed, about 30 minutes.
While the tart bakes, make the anchovy breadcrumbs. Smash the anchovy fillets with ½ Tbs. of the olive oil. Heat the remaining olive oil in a frying pan over medium, then add the garlic clove, smashed anchovies, and finally the breadcrumbs. Cook, stirring frequently, until the breadcrumbs are golden and toasted, about 5 minutes. Scrape out of the pan into a dish and allow to cool, remove the garlic, then stir in the chopped herbs.
When the tart is baked, remove it from the oven and allow it to cool 5-10 minutes. Carefully run a knife around the edge to loosen it. Place a serving plate on top of the skillet, and holding them tightly, invert them so that the skillet is on top and the tart releases onto the serving plate.
Sprinkle the breadcrumbs generously over the tart, slice and serve accompanied by a simple green salad. Taking a cue from apple tart tatin, a little crème fraiche on the side is also a nice accompaniment.
This recipe was entered in the contest for Your Best Recipe Using Heirloom Tomatoes