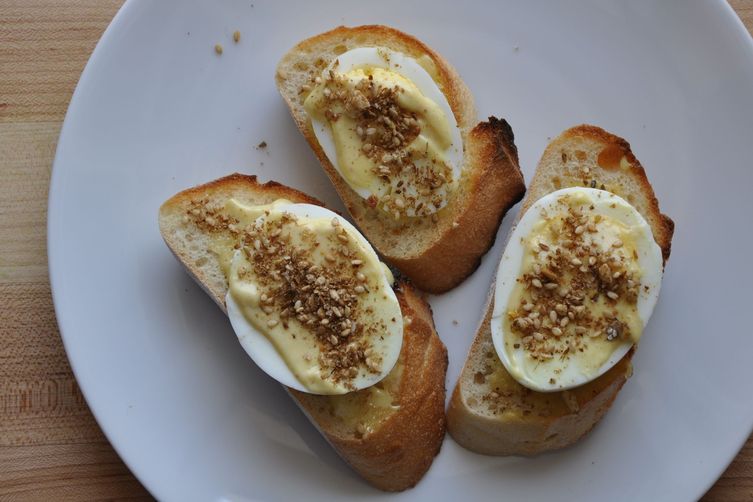 Author Notes: This recipe — easily made with common pantry ingredients on fairly short notice! — gives you several options for using lime aioli with hard cooked eggs and the Egyptian spice, seed and nut mixture known as “dukkah.” In each case, you hard cook and cool the eggs, at least to room temperature. You can then either use the aioli to make deviled eggs, which you generously sprinkle with the dukkah, or you can make 21st century egg canapés, by toasting sliced ovals of rustic bread, then slathering them with the aioli, topped with a slice of hard cooked egg and more aioli, if you like, and then several fat pinches of dukkah. I started making dukkah to eat with a barley flatbread I’ve been perfecting, when I learned that Egyptians eat dukkah with flatbread that they dip first in olive oil. Aioli, with its rich, garlicky flavor, takes it to a whole new level. The basic ingredient combination for the dukkah, and the brilliant suggestion to use it with hard cooked eggs, come from Arabella Boxer in “The Spice Book.” I’ve changed the ratios and substituted grains of paradise for peppercorns, and suggest using pumpkin seeds instead of nuts or garbanzos. (I really prefer the use of pumpkin seeds.) I’ll be posting a variation on this shortly: an egg salad sandwich with dukkah, aioli and watercress. Dukkah’s fantastic on a fried egg and bacon sandwich, too. Enjoy!! ;o) – AntoniaJames —AntoniaJames

Food52 Review: I made the canape version of this recipe and oh, was it divine! I couldn’t assemble the canapes fast enough for my family. The combination of eggs, aioli and dukkah is terrific. AntoniaJames’ dukkah spice mix is really special. My husband lived in Jerusalem and the smell and taste transported him back. I used pumpkin seeds for it and love that variation. I am sprinkling dukkah on everything now … tomato sandwiches, roasted fingerlings, and even on my morning oatmeal which made a delicious savory porridge. I’ll be making it on a regular basis! – BlueKaleRoad —BlueKaleRoad

The Canapés, Deviled Eggs and Dukkah

The Canapés, Deviled Eggs and Dukkah