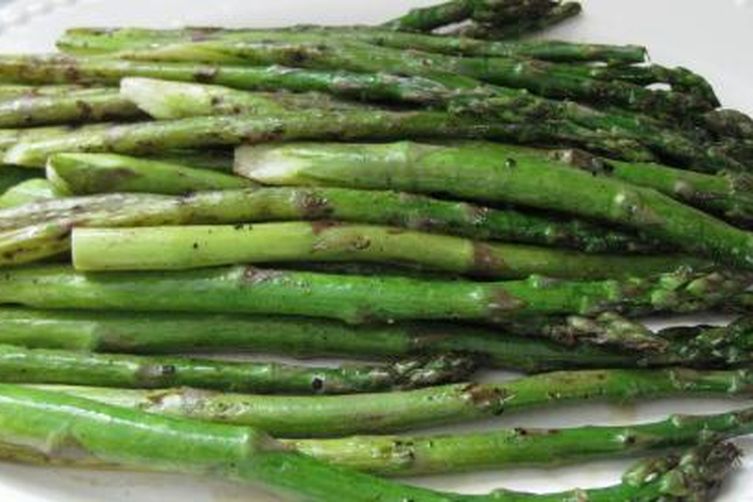 Author Notes: This recipe is inspired by my favorite hole-in-the wall Cambodian restaurant in San Francisco, whose menu curiously has an entire section (following poultry, seafood, and vegetables) devoted to asparagus. I guess the owners have a thing for asparagus. They’re not alone in this obsession– asparagus is one of those foods which inspires passion and mania among its fans. People start looking for it in farmers’ markets and produce stalls with the first signs of Spring, and snatch it up greedily in neat bundles.

My husband’s obsession involves gaining entree to a restaurant’s “secret menu.” He is determined to get “authentic” food, the “real” food in any ethnic restaurant we go to, and he’s convinced that every restaurant has this food on a secret menu. You just have to be worthy of it.

A classic example is this story. It was a month after I had given birth to my first baby, and I wasn’t getting out much. Cambodian food has a special place in our hearts, as it was the cuisine my husband and I had adopted as our favorite when we were in college. So I was excited when my husband called me from work to tell me that he would be picking up some Cambodian food on his way home. (At that point, I would have been happy with anything edible that I didn’t have to prepare; that it was Cambodian food was a bonus.)

He came home with a large brown paper bag emanating the seductive fragrances of lemongrass, turmeric and coconut milk. But he looked agitated. Before I was able to dig in, he said, “There’s something I need to tell you.”

I paused for a second, wondering about the anxiety in his voice. But my postpartum mind was too muddled, and my stomach too hungry, to wonder too much. I just wanted to eat. ”What?”

“Well, you know how when we go to Chinese restaurants, and there are two menus, with the better and more authentic food on the menu written in Chinese?”

“Yeah.” I said, opening takeout cartons in a rush.

“So, well, the nice lady at the Cambodian restaurant was so happy to hear that we had a baby, and um, she thinks you are Cambodian.”

This got my attention enough that I looked up from the food.

“She asked me if you were Cambodian,” he continued, “and I said you were half, because I didn’t want to hurt her feelings.”

“You didn’t want to hurt her feelings so you made up my heritage?”

“I was hoping there was a secret menu.”

“No. But, um, next time we go there, you might want to speak Khmer.”

Despite my love for Cambodian flavors, and with all due respect to our favorite restaurant, I find that the delicate taste of asparagus is overshadowed by heavy sauces. To preserve the elegant beauty of asparagus, I prefer it grilled, with aioli on the side. As an ode to Cambodian cuisine, I’m spiking the aioli with the flavors of lime, lemongrass and curry. This aioli would also make a great spread for Vietnamese banh mi or other sandwiches. —Beautiful, Memorable Food