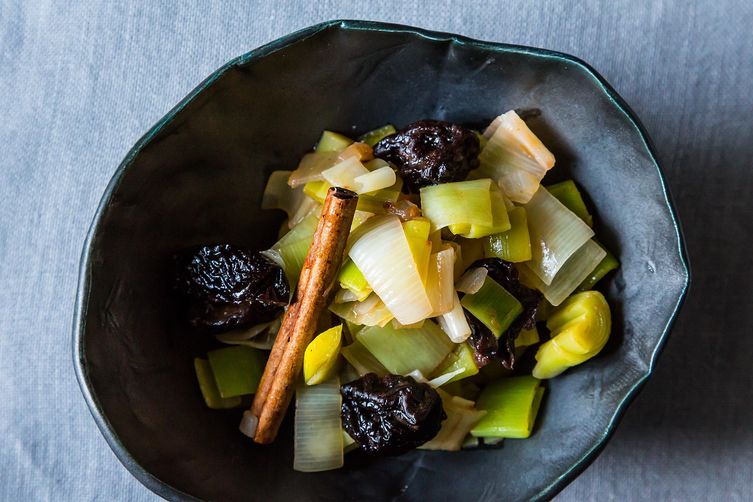 You are here: Home / Meal Type / Vegan / Greek-Style Leeks with Prunes and Cinnamon

Author Notes: This recipe came to me from my Greek boyfriend’s mother, who, in turn, adapted it from a Greek cookbook by Evi Voutsina (“Greek Tastes”). When I was looking for a way to cook leeks, she suggested that I go “Greek” and combine them with prunes, a cinnamon stick, olive oil and tomato juice, claiming that the dish is always a success when she prepares it for dinner parties. While I was initially skeptical, given what I perceived as a strange combination of flavors, the dish ended up being revelatory. The leeks become sweet as they cook, softening their otherwise onion-y flavor; the prunes transform the dish, adding a tangy note to a dish dominated by earthy alliums. And the cinnamon stick, with its dash of spice, makes the meal sing. In a way, this dish is nothing short of Greek magic. —dusty516

Food52 Review: All right. I’ll be honest — the prospect of a prune-cinnamon-leek-tomato melange struck me as a bit odd. But I trust in the Greeks. And after preparing this dish, I’m glad I did. The spicy cinnamon and tart tomatoes just work perfectly with the sweet, caramelized, slow-cooked leeks. And the prunes! The staple of immature puns, baby food, and nursing homes, or a rising gastronomical star? Take one bite of this dish, and I trust you’ll choose the latter. —Macedoine

1 of 2
Photo by James Ransom