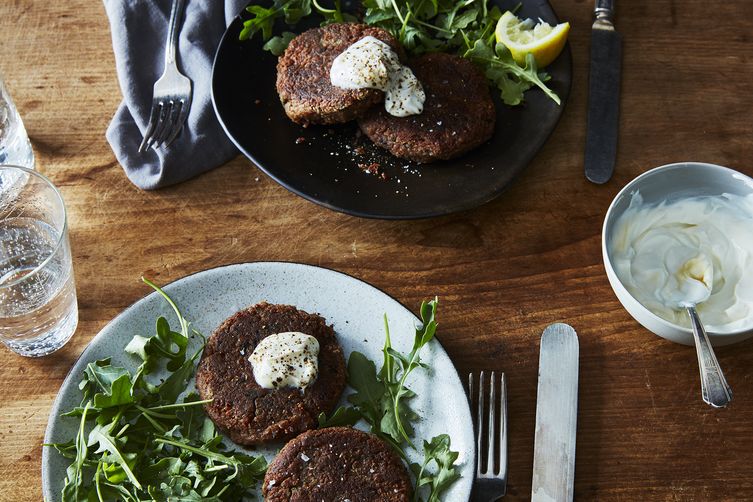 Author Notes: I am completely obsessed with Ethiopian food. I have an injera starter living in my fridge, which is viewed with no small amount of alarm by my exceedingly tolerant husband. I have about a pound of homemade niter kibbeh (clarified, spiced butter) nestled right next to it along with some berbere sauce. Yah, it’s that serious. And because I have about a pound of homemade niter kibbeh in my fridge, I decided to put a dent in it with these griddle cakes. At first I cooked the rice and lentils. It was too mushy. Then I left them raw and just blitzed them in the food processor. It was too dry (like a falafel gone horribly wrong). Then I decided to “poach” them—yahtzee! Dumped a ton of great spices in the mix and sautéed in Ethiopian goodness; cut the cayenne’s heat with some yogurt sweetened with honey. Devoured by grown-ups (and kids!) alike!

One thing that I have found about this kind of food is that the proportions (and sometimes even the ingredients) are entirely flexible. If you don’t have black rice, don’t worry. Ditto with red lentils. Any legumes/grains would do, I’m pretty sure. Same with the niter kibbeh recipe. There doesn’t seem to be any one “authoritative” way to make it. So if you don’t have one particular ingredient, you could omit it without too much grief, I would imagine. And I should mention that this version of niter kibbeh is sort of a mishmash of the dozen or so different recipes I found on the internet when I went a-wassailing around looking for instructions on how to make the stuff. —Niknud

Food52 Review: My husband and I really liked these lentil rice cakes. The clarified butter used for frying the cakes was phenomenal. The recipe called for red lentils. I could be wrong but I assumed that red lentils are the same as the red lentil dal found in Indian grocery stores. However, simmering the grain mixture for 45 minutes turned the red lentils into soup. Next time, I will start with very little water and add more as needed. The recipe suggested using an egg or a couple of tablespoons of flour if the cakes would not hold after frying. I had to use both and the result was excellent and yummy. —cookingProf

Serves: 10 as an appetizer

For the griddle cakes:

For the niter kibbeh:

For the griddle cakes:

For the niter kibbeh:

1 of 3
Photo by James Ransom