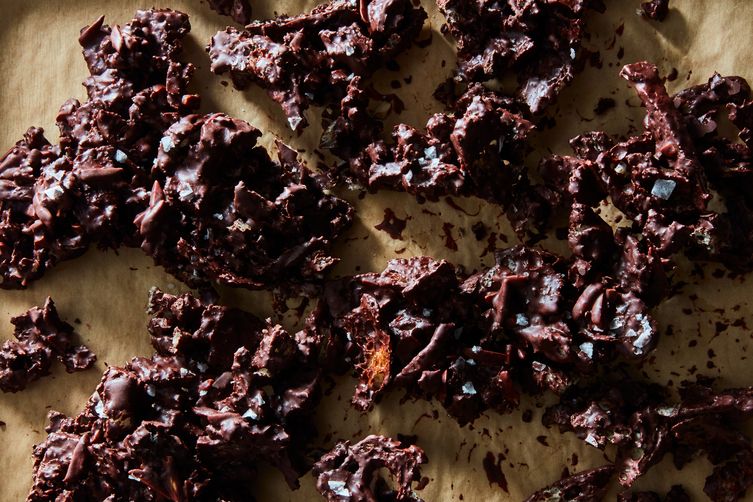 Author Notes: Who doesn’t love bread and chocolate? And why not add good olive oil and sea salt? The method may seem a little quirky, but the results are addictive: Fine shreds of French bread are barely toasted and combined with crunchy slivered almonds, and then tossed with extra virgin olive oil and sprinkled with salt. Finally the whole business it coated with just enough melted dark chocolate to hold it together. You can make individual clusters or a giant, lacy, break-apart bark—or even a wreath or a single large heap or a loaf shape. The oil makes it a perfect Hanukkah treat, but there no reason not to work this recipe through the entire holiday season and beyond.

Note: This recipe is a great excuse to acquire a bottle of olio nuovo—the unfiltered extra virgin oil from the new harvest. You’ll have plenty left over to lavish on everything in sight.

To temper or not to temper: Even though there are workarounds that enable you to make chocolate barks and confections without tempering chocolate, tempering is often the best way to go. But, in this case, not tempering works so well that I’m actually recommending it! There are two reasons. Assuming that you simple melt and cool chocolate down to 90-95°F as instructed, before mixing it with the bread, the subsequent tossing and folding required to coat the bread with chocolate tends to temper the chocolate, more or less inadvertently. Meanwhile, the small percentage of the olive oil clinging to the toast that inevitably gets blended into the chocolate magically helps prevent the chocolate from blooming (discoloring). I still use the fridge to set the chocolate quickly, but after that, the bark seems to keep well, and look good, even for long periods outside the fridge! So go for it—skip tempering—without guilt. —Alice Medrich

Food52 Review: Featured in: Chocolate Lace Is the Addictive, Salty-Sweet Treat You’ve Been Waiting For. —The Editors