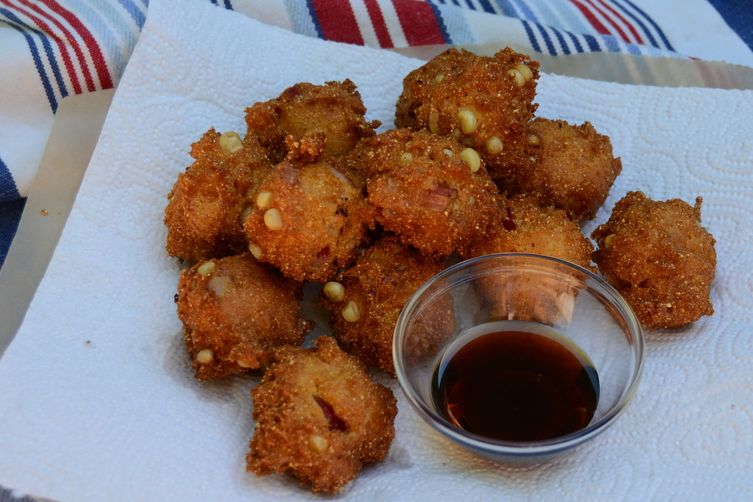 Author Notes: Yep, you read that correctly. These hush puppies include both corn and rhubarb, two of my favorite summer treats. Growing up, my mom, dad, sister and I turned into complete sloths during Wimbledon, the US Open and the Olympics. We’d set up “nests” of pillows and blankets on the floor of our TV room for the duration of the event we were watching. The few breaks we did take included critically important ones for sustenance, and one of the highlights were my mom’s freshly fried hush puppies served with maple syrup.

I loved those things, LOVED them, and still ask her to make them every time I return home. So, I made some this morning because pubs remind me of England, and England reminds me of Wimbledon and London which reminds me of the Olympics, and I just thought it’d all fit so well together.

The basic foundation for these comes from my mom’s recipe which originally came from the back of the Aunt Jemima cornmeal bag, but I’ve made several important changes: the addition of slightly sweetened rhubarb, some ground mustard seed, some freshly cut corn kernels and a beaten egg white (vs the one whole egg my mom uses). The result is that these are both savory and sweet and absolutely lighter than air.

You would love these in a pub, or while watching something fun in your own “nest”, or just for breakfast any day of the week! —em-i-lis