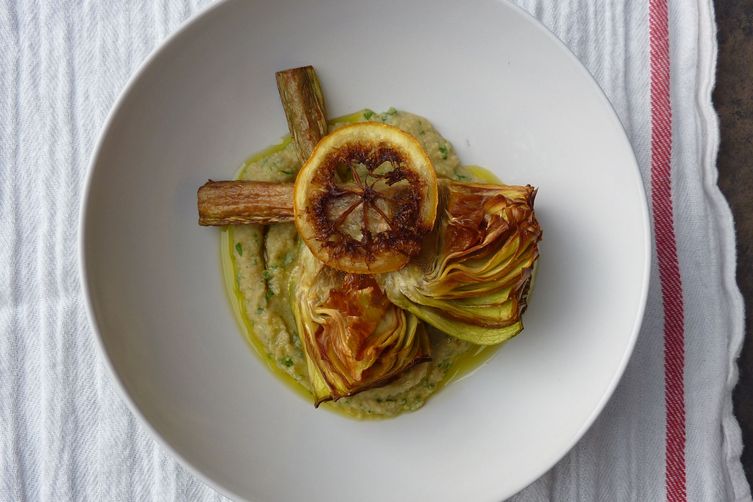 Author Notes: About a year ago, I ate an appetizer of fried baby artichokes at one of my favorite restaurants in Boston, Upstairs on the Square. I’d never had artichokes like that, and I fell for them. Since then, I’ve worked to make a home-style version of that dish, and this is what I came up with. The artichoke is really delicious prepared this way- the stalk and heart become wonderfully tender, and the outer edges of the leaves become crunchy like potato chips. So good! Oh, and if you haven’t had fried lemon slices before, hold onto your hat! They are wildly and deliciously lemony. I serve these artichokes with a chickpea puree with gremolata flavors, but feel free to substitute any creamy dip, or just a smear of greek yogurt. – arielleclementine —arielleclementine

Food52 Review: I’ve always been curious about frying artichokes at home, and this was a great first recipe to try. Arielleclementine has you peel the outer leaves of the artichokes, which won’t get crisp or tender enough from just one round of frying. I didn’t peel off quite enough of those tough leaves and learned that the hard way. That notwithstanding, this recipe totally works: by the time the exterior of the artichokes was golden, the inside miraculously had turned tender and juicy. In addition to salting them, I squeezed some lemon on top as well — delicious. And the chickpea purée is reminiscent of hummus in Israel, which is often perfumed with garlic and parsley. It provides the perfect contrast to the crunch of the artichokes and lemons. Will definitely be making this

For the Chickpea Puree

For the Chickpea Puree