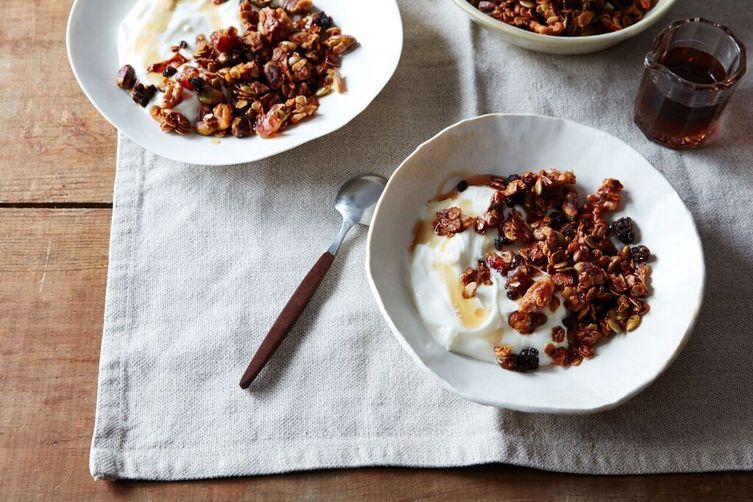 Author Notes: This granola straddles the line between sweet and savory and is yet another example of the glory of brown butter. It’s a liberal riff on Nekisia Davis’ Maple and Olive Oil Granola, which I’ve made too many times to count. The sumac lends a subtle fruity sourness, and the honey and pomegranate molasses a sweet-tart finish. It’s downright addictive. Packaged in small jars, it’d make a great holiday gift. —EmilyC

Food52 Review: WHO: EmilyC is a Virginia-based environmental scientist whose recipes have “flavor” writ large.

WHAT: A toasty, buttery take on an old favorite granola recipe—updated with zingy sumac and pomegranate molasses.

HOW: Melt together the butter, honey, and pomegranate molasses; then toss it with the oats, spices, and other dry ingredients. Bake until golden and crisp (and just try to stop eating it).

WHY WE LOVE IT: EmilyC gives a classic granola recipe a subtle Middle Eastern twist with the additions of pomegranate molasses and sumac. The brown butter adds a richness and complexity that granola made with olive oil misses. Adding some dried fruit, as suggested, rounds out this crunchy chewy treat. (And, like EmilyC notes, it really does make the perfect holiday gift.) —The Editors

1 of 5
Photo by Mark Weinberg

2 of 5
Photo by Mark Weinberg