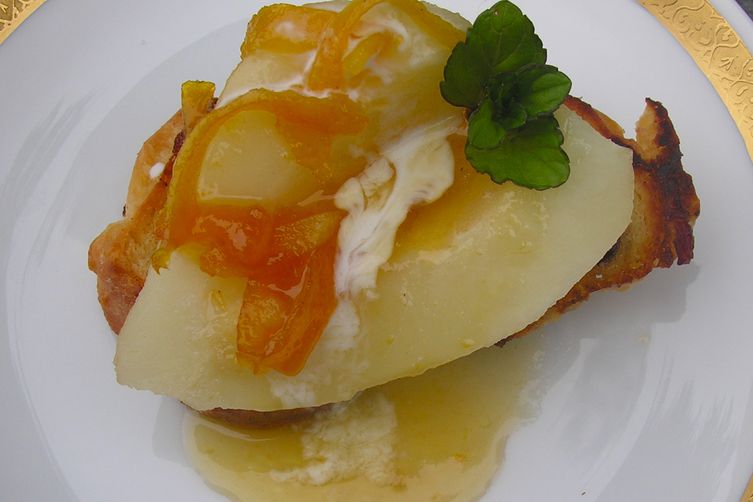 Author Notes: When you have fragrant juicy pears, you have to make some hard decisions. Should you could keep it simple and just slice and eat them with a great cheese? Perhaps add them to a winter salad? Make a tart? Good pears can be hard to find. When you get your hands on some, rest assured that whichever path you chose, it’s going to be good. Here, pears are baked in a boozy liquid until tender. The braising liquid is boiled down with orange zest and more brandy to make a sauce. The pears are served over fried eggy challah bread with the sauce and a bit of cream spooned over the top. It is a very nice path for a good pear. – Waverly —Waverly

Food52 Review: Waverly uses a very clever recipe format here with active headings like Prep and Bake that give a narrative quality to the recipe. This adds not only clarity, but organization to the logical way the recipe is sequenced. The thoughtfulness continues with the treatment and flavors of the pear. The dish offers a well-rounded, balanced dessert with a complexity of flavors. The tender braised slightly buttered pear bathed in vermouth and brandy infused with notes of cinnamon shines as the star in this dessert, with the highlighting sweetness of the apricot and tang of the orange in the brandy sauce. The textural contrast of the buttery fried challah grounds it with a perfect base. The drizzle of fresh cream with a sprig of mint crowns this masterpiece. Thank you, Waverly. – Sagegreen —Sagegreen