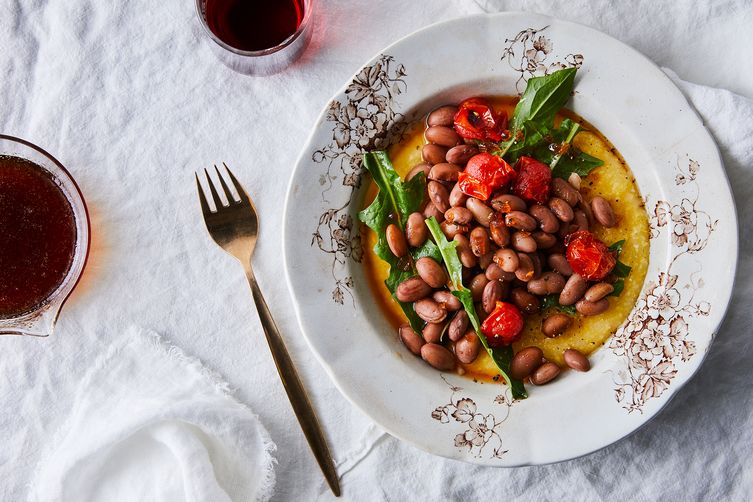 Author Notes: Almost everyone I know is ready to say goodbye to winter and to welcome spring. I feel the same way, but at the same time I tend to cling to the cooler weather about to depart because I am not quite ready to say good-bye to winter ragus or slow braised stews. This recipe has become one of my favorite way to bridge the seasons. It offers all of the delicious, warming comforts of a slow braised dish for those chilly gray days that are a part of springtime in Victoria but it also includes some of the springtime bounty that I am starting to see in my garden, such as slightly spicy dandelions and arugula that say to me that warm, sunny weather will soon arrive.

This dish has several components but other than cooking the grits most of them be made ahead of time. In fact, the flavor of beans seem to improve when they are cooked a day in advance. Following the advice of chef Thomas Keller and Deb Perelman, author of the Smitten Kitchen blog, I have become a convert of cooking dried beans in the slow cooker. The gentle even heat makes for meltingly tender beans that don’t fall apart. This recipe will make a lot more beans than you need, but they are a great thing to have on hand. Freeze them and add them to soups, stews or pasta dishes. Or I sometimes just heat up a bowlful for lunch. Add some diced spring radishes, some thinly sliced avocado, a sprinkling of grated ricotta salata cheese, drizzle with some extra virgin olive oil, and you will dine quite well.

The technique for broiling the tomatoes is inspired by Nancy Harmon Jenkins and Zuni Café chef Judy Rogers. I experimented with a variety of different techniques of roasting tomatoes and I found the quick broiling method to be the best one for delivering a maximum amount of flavour, especially when using not-yet-local tomatoes.

The agrodolce is my version of an old school Sicilian sauce that is traditionally made with vinegar and sugar. I use a local wildflower honey instead of sugar and add some shallots for an added boost of flavor. I love the contrast of the sweet and sour notes of this sauce and how it can perk up just about any dish. It particularly brightens this stew with its delicious flavors of earthy, soft beans, peppery greens, creamy grits and bursts of blistered tomato.

Serves: 4 with leftovers for tomorrow's lunch!

1 of 2
Photo by Luzena Adams