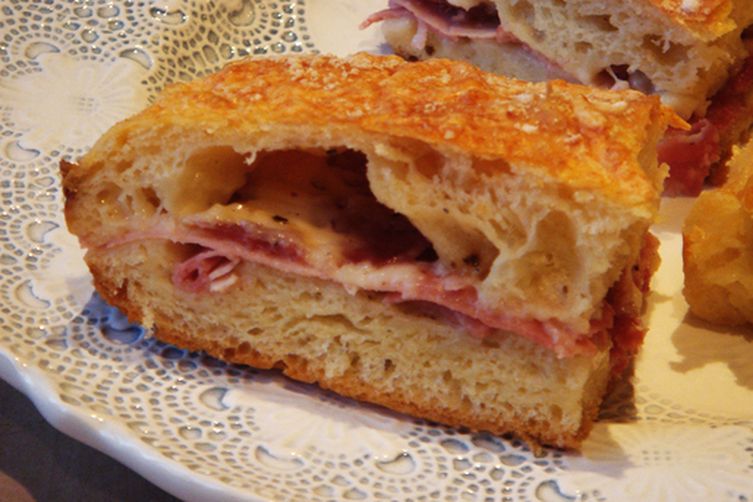 Author Notes: This is a rich and tasty bread that is great for parties since it can be eaten without a plate or a fork and is brilliant for children’s parties (leave out the pepper and use only ham and cheese) or for picnics This recipe derives from a Portuguese traditional stuffed bread made in the North of Portugal called “Bola”. This was made by the farmers wives for the farmers to take to work when they were out working the fields. It consists of bread dough enriched with lard or butter and then put in layeres in a baking tray, filled in the middle with meat leftovers like roast pork, veal or chicken, chourizo, or in hard times just plain lard and some chourizo (smoked sausage). You still find it in most pastry shops cut in slices which people eat for a quick snack. My take on this recipe is to make enrichen the bread dough with milk and butter and fill in the middle with whatever I have as left overs – roast meat, chicken or in the absence of left overs, with ham, salami and cheese. As I live in Italy most of the time I have to go with whatever products I find so this is an Italianized version which we eat at home. I call it surprise bread because everytime I make it, I put different things inside and when somebody asks me what is in it I answer “Surprise!”.

This recipe has been updated on 6th of March 2012 to use dry yeast, as it’s easier to obtain than fresh yeast. —Maria Teresa Jorge

For the rich bread dough